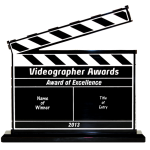 VZ Communications, in partnership with VZ Productions, was honored with an Award of Distinction in the 2013 Videographer Awards for a series of five videos produced for Dover Corporation that featured employees who have made substantial changes in their lives that have improved their overall health and wellness. These videos were produced in April and May 2013.